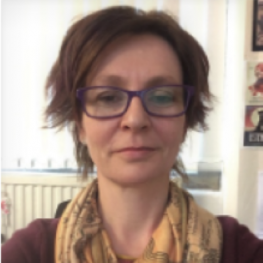 Sara Brown, Chair of Signum's Language & Literature Department, has a Masters degree in International History from the London School of Economics and completed her Ph.D. in Literature at Salford University.

Sara Brown PhD MSc(Econ) serves Signum University as Language & Literature Department Chair and Thesis Coordinator for the MA Program.  She is a Lecturer and Preceptor within the Language and Literature faculty and has served as an Elected Faculty Member on the Board. Sara also teaches on the Signum Path Program.

Sara Brown lives in North Wales, UK. She was an English teacher, teaching ungrateful teenagers, for over twenty-five years but recently gave this up to work full time for Signum University. She has been with Signum since 2012, working on courses that have included ‘Modern Fantasy’ with Corey Olsen, ‘Tolkien’s World of Middle-earth’ with Verlyn Flieger, ‘Roots of the Mountain’ with Doug Anderson, ‘Cultural Studies and Audience Reception of The Lord of the Rings’ with Robin Reid and ‘Celtic Myth in Children’s Fantasy’ with Dimitra Fimi. In 2017 Sara presented her own 12-week lecture series entitled ‘Tolkien in Context: Middle-earth as a Roadmap to Twentieth-Century Anxieties’, which explored Tolkien’s writing as a response to modernity.

Besides her BA (Hons) in English and History, Sara has an MSc in International History, Politics & Economics from the London School of Economics, for which she wrote a thesis on The Problem of the Gold Standard in International Politics and Economics in the Nineteenth Century. She completed her Ph.D. in Literature at Salford University in 2013. Entitled From Abjection to Alchemy in J.R.R. Tolkien’s Middle-earth Legendarium, the thesis explores the way in which Tolkien was responding to the anxieties of the post-war world in the mid twentieth century, drawing on (amongst others) the theories of Julia Kristeva and Donna Haraway. She believes it’s a real page-turner. Sara has given a number of lectures at various conferences on the topics of Tolkien, fantasy fiction, and fandom, and is regularly seen at Tolkien Society events in the UK. She currently serves on the editorial board of Mallorn, the academic journal of the Tolkien Society. Sara is also co-presenter on the Tolkien Society Award-winning podcast, The Tolkien Experience. Her research interests are primarily in Tolkien Studies. She has been a member of the Faculty since Spring 2012.