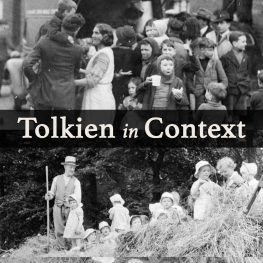 This course examines how Tolkien’s subcreated world of Middle-earth engages with issues and concepts relevant to readers, including racism, immigration, the place of women, the ongoing battle of good versus evil, environmental concerns and the rise of technology.

In 2000, Dr. Tom Shippey highlighted J.R.R. Tolkien’s contribution to literature, identifying him as the “Author of the Century.” Shippey makes a compelling case for the quality of Tolkien’s writing, arguing that this “rests not on mere charm or strangeness…but on a deeply serious response to what will be seen in the end as the major issues of his century: the origin and nature of evil…human existence in Middle-earth, without the support of divine Revelation; cultural relativity; and the corruptions and continuities of language.” These, he declares, “are themes which no one can afford to despise, or need be ashamed of studying.”

What is immediately apparent is that in proclaiming Tolkien as “author of the century,” Shippey situates Tolkien as an author of the twentieth century – in other words, an author who belongs to a very particular time and whose works reflect that time. Within texts such as The Lord of the Rings, the difficulties, tensions and social changes experienced during the immediate post-war period in Britain resonate strongly and add to Tolkien’s extraordinary world-building, thus offering a further dimension for reader exploration.

This course examines the ways in which Tolkien’s Middle-earth is a subcreated world in constant engagement with issues and concepts of ongoing relevance to readers, including racism, immigration, the place of women, the ongoing battle of good versus evil, environmental concerns and the rise of technology.

Note on the Schedule: The summer 2022 semester will include a one-week summer break which will fall on the week of June 20, 2022.

All texts by J.R.R. Tolkien. Familiarity with these works prior to the course is assumed.