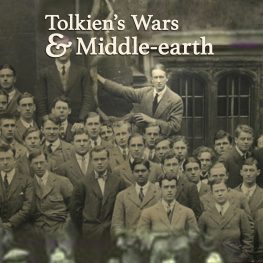 This course explores the life of J.R.R. Tolkien and the impact his experiences had on his work, with a particular focus on the World War I and World War II time periods.

Who were the T.C.B.S? How did they influence Tolkien? How did World War I impact Tolkien?

A century after Tolkien began crafting his legendarium, it’s time to ask what it had to do with the cataclysmic changes of his times. What did he do in the First World War, and how did it change him? What became of his first “fellowship” of friends? How does the trench experience infuse The Lord of the Rings and other works, and how does all this relate to his other passions – myth and fairy-tale, the medieval, and the invention of languages? What about the Second World War, and Tolkien’s famous denial of allegorical reference to it? Throughout, biographer John Garth will draw from the on-going research that produced his award-winning book Tolkien and the Great War – much of it previously unseen. You’ll never look at Tolkien and Middle-earth in the same way again.

Week 4 – The Birth of Middle-earth

Week 5 – The Breaking of the Fellowship: The T.C.B.S., the Army and the Somme

Week 6 – Goodbye to All That: War Writing and Disenchantment

Week 7 – Quickened to Full Life by War: The Mythopoeic Response

Week 8 – A Chronicle of Ancient Sunlight: The Book of Lost Tales

Week 9 – A Messenger, a Tarrier: Writing Between the Wars

Week 10 – Turning Points: The Hobbit and Other Writings

Week 11 – The Return of the Shadow: The Lord of the Rings

Week 12 – Undertones of War: The Lord of the Rings

* Please be familiar with these works prior to the start of class.

* Required selections from the Suggested Texts and additional required reading will be made available online via the Google Classroom page.