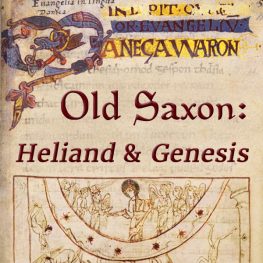 Read and translate the major works of Old Saxon literature in this language seminar.

The Old Saxon language serves as a useful bridge between Old English and the continental West Germanic languages like Old High German and Old Low Franconian (Old Dutch). However, the language is often understudied in the English-speaking world due to its continental origin, and too often has fallen into the “German-only” branch of study within Germanic philology. Old Saxon preserves a remarkable 9th-century literary poem known as the Hêliand (that is, the Savior), a long, syncretic reworking of the Gospels into a style of Germanic alliterative verse usually reserved for heroic poetry. Similarly, the poem fashioned much of the Gospel narrative into a more familiar Old Saxon cultural milieu, in some ways transforming Christ and his disciples into a Germanic chieftain and his thanes. The surviving manuscripts are fairly easy to read, and there will be considerable attention paid in this course to learning how to read the texts from the original manuscripts. In addition to the Hêliand, parts of the Old English poem Genesis were originally composed in Old Saxon, which scholars labeled Genesis B (the bulk of the poem was labeled Genesis A), and fragments of the original Old Saxon text have survived. The Hêliand and Genesis are the only survivors of the unique poetic output of Old Saxon, and excerpts of both texts will be studied in depth in this course.

This course has a prerequisite, though a slightly flexible one, and is designed to be taken after at least one semester of Old English or Germanic Philology, and assumes familiarity with translating related Germanic languages (especially medieval forms of West Germanic languages, such as Old English or Old High German). The coursework most heavily involves preparing translations of Old Saxon texts into modern English, followed by reading secondary scholarship. The overall aim of the course is to acquire advanced reading knowledge of the Old Saxon language, particularly through the Hêliand and Genesis.

Week 1 –The Historical and Linguistic Background

Week 3 – The Manuscripts of the Heliand

Read: Lehmann, ‘The Rhythm of Old Saxon’ (in The Development of Germanic Alliterative Verse Form)

Week 6 – The Heliand as Verse

Week 7 – The Heliand and Its Sources

Week 8 – Religion and Peoples in the Heliand

Murphy, ‘The Jews in the Heliand’

Read: Boutkan, ‘The Solution of the Old Saxon Auslaut Problem’

Read: Doane, The Saxon Genesis (excerpts from the Introduction)

Read: d’Alquen & Trevers, ‘The Lay of Hildebrand: A Case for a Low German Written Original’

Further required readings will be provided in class.

Optional Text: Murphy 1995, The Saxon Savior: The Germanic Transformation of the Gospel in the Ninth-Century Heliand