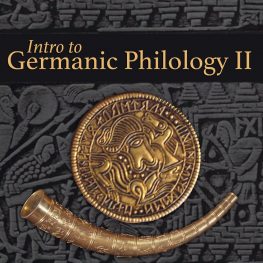 This class provides an introduction to Germanic comparative philology in a broad sense. Students are not expected to have prior familiarity with any language other than modern English.

Prerequisite: Intro to Germanic Philology I

Building on the survey of the Germanic family in Germanic Philology I, this class will provide an introduction to Germanic comparative philology. We will take a broad view of the subject: our foundational perspective will be the methodology of linguistic comparison and reconstruction, but we will also look closely at the cultural dimension of philology (including literary history). During the first half of the semester, we will examine a variety of topics relevant to the cultural background of the Germanic languages in general, including religion, law, poetics, and heroic legend. In the second half, we will survey the Indo-European background and contexts for Germanic as a whole, from both linguistic and cultural perspectives.

Students are not expected to have prior familiarity with any language other than modern English. Coursework involves readings, philological exercises, and the study of short, glossed excerpts from medieval texts. The overall aim is to provide a basic familiarity with the methods and subject matter of Germanic philology and to make the medieval and ancient languages and texts that provide the field’s raw data appear less unfamiliar.

1a Neighbours and Background: Germanic in Context

1b A Sketch of Proto-Germanic

2a From Tacitus to the Viking Age

4a The Problem of the Nibelungs

6a The Relatives of Germanic: The Oldest Indo-European Languages

6b The Relatives of Germanic: The Other Indo-European Languages

7a The Sounds of Proto-Indo-European

7b Sound Changes to Proto-Germanic

8a Roots, Nouns, and Morphology in Proto-Indo-European

8b Nominal Changes to Proto-Germanic

9a Verbs in Proto-Indo-European

9b Verbal Changes to Proto-Germanic

10a Wackernagel’s and Kuhn’s Laws: Aspects of Syntactic Change

10b Dragons: Poetic Culture in Indo-European and Germanic

11a The Indo-European ‘Homeland’

11b Germanic in Europe

12a The North Germanic Languages Today

12a The West Germanic Languages Today

This course will be offered in the following semesters.