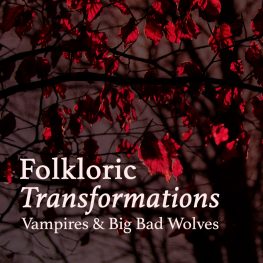 This course explores the transformations of folklore in modern literature, film, and TV, focusing primarily on vampires, as well as fairy tale creatures.

Folklore is a major source of modern imaginative literature and popular culture. Think of supernatural creatures such as vampires, werewolves, ghosts and fairies, all populating the oral stories of generations of peoples. Think about the tales you heard as a child, “Little Red Riding Hood,” “Cinderella,” “Snow-White” (among many others), the origins of which are lost in the mists of time.

In this course we will explore the transformations of folklore in modern literature, film, and TV. The first part of the course will focus on the figure of the vampire, from ancient Mesopotamian blood-sucking female demons, to early modern Eastern European folklore, and then on to the literary vampire from Coleridge and Polidori to Dracula and Buffy the Vampire Slayer.

The aim of the course is to gain an understanding of the role of folklore in modern literary and popular culture texts, as well as evaluate what it is that makes folklore material so versatile and enduring in modern culture.

Note: This course has been retired from Signum University’s course rotation but is still available as an Anytime Audit.

Week 1 – Introduction to Folklore and its transformations

Dracula as a ‘founding narrative’, Dracula and psychoanalysis/sexuality, Dracula and the late Victorian context