C.S. Lewis and Mythologies of Love and Sex 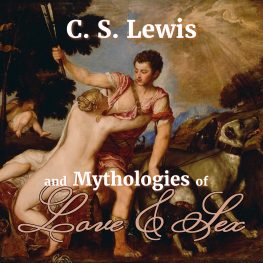 This course explores some of the great mythologies of love that provide a background to today’s culture, sketched out along the twin paths of C.S. Lewis’ The Four Loves and a chronological development of the ideas of love.

This course explores some of the great mythologies of love that provide a background to today’s culture. Sketched out along the twin paths of C.S. Lewis’ The Four Loves and a chronological development of the idea of romantic love, we explore foundational stories of love, sex, fidelity and betrayal, romance, loss, marriage, and divine and devotional love.

This treatment of love and sex has six movements. In the prologue we ask questions about the conversations of sex and love today, we begin in the civilizational nursery by looking at some of the ideas of love in ancient Mediterranean cultures. As we move into the first chapter, we look at the emergence of Greek and Jewish understanding of love, and the Christian idea of agape, or unconditional love.

In the second chapter, we will see the development—and in some cases a recovery—of the myth of romantic love in Medieval and Renaissance Europe, including themes of devotional, courtly, forbidden, and erotic loves, as well as the forms of storytelling that blended them all. Once love stories have shed their allegorical undertones, Shakespeare is an accessible starting point to discuss the place of romantic love in culture. Shakespeare is in this way the inventor of the modern romantic tradition, though his work suggests an inversion of that tradition. While Goethe captures romantic love in all its poignancy, we see Jane Austen’s inversive mind expand the theme, and turn to the four loves with a powerful cultural treatment in Pride & Prejudice.

In chapter three we turn to familial loves. Perhaps no more rapid change in relationships has come in the family loves, particularly those between parents and children. We will read pieces that suggest that the reassertion of this parental love makes for new problems as romantic, religious, and vocational love sit in uncomfortable tension with that earliest of all loves. Problematizing parental love, then, serves as an opportunity to return to the messages and stories of love in culture today.

Chapter four’s consideration of friendship love leaves us in a difficult situation. Though popular culture is beset with friends on facebook and television, the deep traditions of friendship are largely lost to us. So we turn to some children’s literature to discuss this almost forgotten love.

As an epilogue to the class, we ask some questions about love and culture today. Are we really in a renewed romanticism? What is love in a digital age? What happens when love fails—or when the mythologies of love fail? Which is the most important of the loves? We will close by returning to an ancient theme of “calling,” meant to open questions as to where the reader sits in the world.

Prologue: Who Did Write the Book of Love?

Week 1: “Art is a Lie Which Makes us Realize the Truth”

Chapter One: The Emergence of Agape

Chapter Two: The Establishment (and Inversion?) of Eros

Week 4: Form, Flesh and Fidelity: The Art of Courtly Love

Week 5: Shakespeare: The Invention (and Inversion?) of Romantic Love

Week 6: Goethe and the Romantic Tradition

Week 7: Jane Austen and the Change of the Heart

Chapter Three: The Problem of Storge

Week 9: When Love is No Better than Hate

Chapter Four: Can We Recover Philia?

Week 11: Where did Friendship Go?

Epilogue: Love and the Cosmos

Most of these books are widely available in local libraries or in inexpensive editions. Any edition of the books is fine. Translation in parentheses; it is okay to choose a different translation. Additional texts may be provided as handouts/downloads in class.