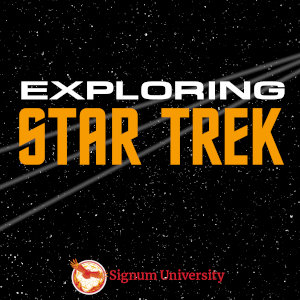 Amy Sturgis boldly takes Signum where it's never gone before: into Star Trek!

Now in its sixth decade, the multimedia Star Trek franchise has engaged the imaginations of generations of fans. Star Trek creators have refined many of the ingredients of Star Trek storytelling over the years, including using the metaphors of science fiction to both wrestle with timeless moral dilemmas and philosophical questions and also make timely critiques of political and social problems. Other aspects of Star Trek, such as its optimistic (even utopian) vision of the future, have been complicated and revised from time to time. This course will explore how Star Trek has changed science fiction and popular culture not only through producing hit TV series, films, novels, games, and merchandise, but also by precedent-setting global fan participation in the form of fan campaigns, conventions, and transformative works (fan fiction, film, cosplay, etc.). How does each installment of the Star Trek story embody the hopes and fears of the time in which it was made? How has the imagination, innovation, and diversity displayed in Star Trek changed our reality today and kept (or perhaps failed to keep) the franchise relevant? How has Star Trek storytelling evolved, and where will it go next? These are some of the questions we will consider as we boldly go where no Signum University class has gone before.

Week 1: Why should we explore Star Trek?

Additional short texts will be linked to or provided by the professor.

TV series (select episodes will be required viewing during the week as each series is explored in depth):