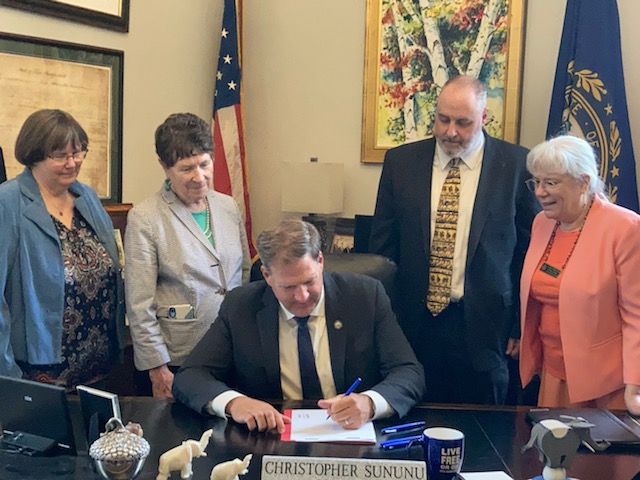 July 29, 2021:  New Hampshire Governor Chris Sununu has signed a simple piece of legislation into law.  Senate Bill 513 on New Hampshire’s 2021 docket authorizes Signum University to grant the Master of Arts Degree.  State Senator Ruth Ward sponsored the bill and walked with the university right up through the historic signing.

The one-sentence bill affirms the approval of the New Hampshire State Education Department’s Higher Education Commission.  The Commission made a detailed review of Signum’s program for credit bearing courses, from reading faculty curricula vitarum to reading student work to hearing from the advising team about student support.

With that approval in hand, Signum turned to the legislature for authorization.  The House of Representatives and the Senate both have education committees, each of which examined the testimony of the Higher Ed Commission as well as inviting testimony from Corey Olsen and others who spoke to the bill.

It’s an unusual bill.  A new institution of higher education is established in New Hampshire less than once each decade.  A great deal of explanation and one false start later, Senator Ward introduced Signum’s bill to the 2021 docket in January.  After approval by both committees, the bill was discussed by the entire New Hampshire Senate and House of Representatives (which has the distinction of being the fourth largest parliamentary style body in the English-speaking world at four hundred members for a state of 1.3 million people).

Much discussion ensued! Signum University’s completely on-line model, commitment to affordable education, and focus on imaginative literature and Germanic philology elicited many strong opinions.  Both bodies eventually voted to pass the bill in March of this year. From the Legislature to the Governor’s office took four months. Senator Ward and the Representatives Lekas (a Tolkien-fan couple who are devoted to public service) celebrated with Corey and Bridget Olsen and other members of the Signum community on the delightful day of signing!

There may have been a few celebratory and refreshing beverages lifted in honor of the Signum Eagles that evening at the charming pub across the street from the State House.

Are you ready for an adventure?