The Tower by Owen Barfield: Presentation and Q&A 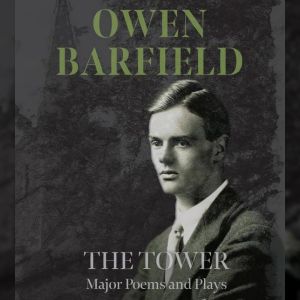 Join us at 1pm ET on December 3, 2020, for a presentation and Q&A by the editors of a new volume of Owen Barfield's poetry and plays.

Join us at 1pm Eastern on Thursday, December 3rd for a presentation and Q&A with the editors of a new volume of previously unpublished work by Owen Barfield, the first and last Inkling. The event will include a short talk introducing Barfield’s work by the author’s grandson. The discussion will be moderated by Gabriel Schenk.

You can purchase The Tower: Major Poems and Plays directly from Parlor Press.

Owen Barfield is known primarily for his many publications on the evolution of consciousness and the essential reframing of cultural history that results from this theory. At the center of his philosophy is a deep analysis of mythology and poetics that draws from Coleridge, Steiner, and others to reveal the noetic role of the poetic principle and its salient shifts that map the evolution of conscious experience. A member of the Oxford Inklings group, Barfield’s first published book, The Silver Trumpet (1925), is the first märchen, or fantasy story, published by any of them.

Despite the influence Barfield exerted on contemporary authors such as Howard Nemerov and Saul Bellow, the biggest gaps in the published corpus of the Philosopher of Poetry are most of the major poems and poetic dramas he wrote according to his theories that place poetics at the core of conscious experience itself. This current publication remedies this absence by presenting five striking literary pieces composed throughout Barfield’s lifetime. The Tower, an introspective narrative poem, is the ‘great work’ of Barfield’s youth; Medea, a mythopoeic drama, is seemingly his last major poetic and dramatic work. Between these two are the mythopoeic narrative poem Riders on Pegasus, a trilogy of Anthroposophical mystery plays Angels at Bay, and the light-hearted extended poem The Unicorn. Readers of Barfield’s philosophical works and Inklings enthusiasts will find much to admire and enjoy in this volume.

Dr. Leslie A. Taylor is an independent scholar who specializes in Classical and Renaissance Literature. She has published on the Greek and Hebrew translations of Boethius’s De Consolatione Philosophiae and has co-authored with Jefferey H. Taylor a book on the influence of Boethius on Milton’s Paradise Lost.

Dr. Jefferey H. Taylor is a Professor of English at Metropolitan State University of Denver. He is author of Four Levels of Meaning in the York Cycle of Mystery Plays and has published on the Dutch and Hebrew translations of Boethius. Dr. Taylor is recipient of the 2016 Owen Barfield Award for Excellence.

Dr. David Blakesley is the Robert S. Campbell Chair in Technical Communication and Professor of English at Clemson University and a Fellow of the Rhetoric Society of America. He is the publisher and founder of Parlor Press, now in its eighteenth year.