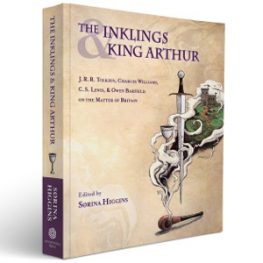 Join us on February 5, 2018, at 11am ET for a roundtable discussion celebrating the release of The Inklings and King Arthur, edited by Sørina Higgins.

On February 5, 2018, at 11am ET, Signum University will host a Signum Symposium roundtable discussion celebrating the release of The Inklings and King Arthur, edited by Chair of the Language & Literature Department Sørina Higgins.

Will King Arthur ever return to England? He already has.

In the midst of war-torn Britain, King Arthur returned in the writings of the Oxford Inklings. Learn how J. R. R. Tolkien, C. S. Lewis, Charles Williams, and Owen Barfield brought hope to their times and our own in their Arthurian literature. Although studies of the “Oxford Inklings” abound, astonishingly enough, none has yet examined their great body of Arthurian work. Yet each of these major writers tackled serious and relevant questions about government, gender, violence, imperialism, secularism, and spirituality through their stories of the Quest for the Holy Grail.

This rigorous and sophisticated volume of studies does so for the first time. It is edited by Sørina Higgins, with a chapter by Brenton Dickieson (Signum faculty member) and one by alumna Alyssa House-Thomas, contributions from such Inklings luminaries as Malcolm Guite and Holly Ordway, and endorsements by Michael Ward, Owen A. Barfield, Tom Shippey, Verlyn Flieger, Carol and Philip Zaleski, Michael Drout, Janet Brennan Croft, John Rateliff, and our own Corey Olsen. The cover design is by Signum student Emily Austin. Join the editor and contributors to talk about this exciting new book!

Sørina Higgins is the Chair of the Department of Language and Literature at Signum University and a Ph.D. candidate, Teacher of Record, and Presidential Scholar at Baylor University. At Signum, she serves as Thesis Coordinator, Host of Signum Symposia, and Preceptor for courses on the Inklings. Her interests include British Modernism, the works of the Inklings, Arthuriana, and magic. She holds an M.A. from Middlebury College’s Bread Loaf School of English, where she wrote about Sehnsucht in the works of C. S. Lewis. She blogs about British poet Charles Williams at The Oddest Inkling. In addition to editing The Inklings and King Arthur (Apocryphile, 2018), Sørina wrote the introduction to a new edition of Charles Williams’s Taliessin through Logres (Apocryphile, 2016) and published an edition of The Chapel of the Thorn by Charles Williams (Apocryphile, 2014). As a creative writer, Sørina has published two books of poetry, The Significance of Swans (2007) and Caduceus (2012), and would be working on a novel or two if she weren’t, you know, in grad school.

Brenton Dickieson is Adjunct Professor in Theology at Maritime Christian College, Sessional Professor at the Centre for the Study of Christianity and Culture at the University of Prince Edward Island, and Instructor in Spiritual Theology at Regent College in Vancouver, BC. He also does freelance speaking and writing and is the author of the popular Faith and Fiction blog www.aPilgrimInNarnia.com. After completing a Masters degree in New Testament Studies at Regent College, Brenton moved with his wife Kerry and his son Nicolas to their native home in Charlottetown, PEI. His academic interests include how the creation of fictional universes helps in spiritual formation, theological exploration, and cultural criticism. He is now working on a PhD at the University of Chester, focusing his work on C.S. Lewis, J.R.R. Tolkien, and the Inklings.

Malcolm Guite: Poet-Priest Malcolm Guite is Chaplain of Girton College, Cambridge, and teaches at the Faculty of Divinity at the University of Cambridge. He lectures widely in England and North America on Theology and Literature and has published poetry, theology, and literary criticism and has worked as a librettist. His books include: Love, Remember (November 2017); Mariner, a spiritual biography of Samuel Taylor Coleridge (February 2017); Parable and Paradox (2016); The Singing Bowl (2013); Sounding the Seasons (2012); Theology and the Poetic Imagination (2010) and Faith Hope and Poetry (2006). Malcolm has edited two poetry anthologies for Lent and Advent: The Word in the Wilderness (2014) and Waiting on the Word (2015). Malcolm also writes Poet’s Corner, a weekly column in the Church Times. Malcolm has a particular interest in the imagination as a truth-bearing faculty and continues to reflect deeply on how poetry can stimulate and re-awaken our prayer life. Malcolm enjoys sailing, walking, old books, live music, riding his Harley Davidson motorbike and all the varieties of the British countryside and weather. Malcolm is also part of the rock band Mystery Train, regularly performing gigs at Grantchester, Cambridge and other places around Cambridgeshire. www.malcolmguite.com

Brenton’s A Pilgrim In Narnia blog is doing a 12-part series on Inklings and Arthur, running mid-January through March.

You may also want to grab one or more of the key texts that we will be discussing: