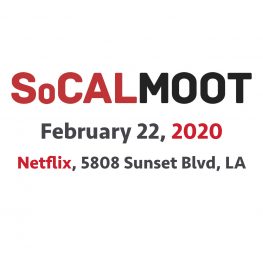 Join Signum University and the Mythgard Institute on February 22, 2020, for SoCalMoot.

Join Signum University and the Mythgard Institute on February 22, 2020, from 9am – 4pm PST, for SoCalMoot (previously LAMoot). The theme of this year’s moot is Adaptation, and we will be joined by special guest, Signum University Founder and President Dr. Corey Olsen.

SoCalMoot will be held at the Netflix offices at 5808 Sunset Boulevard in Los Angeles CA.

“Any adaptation is a translation, and there is such a thing as an unreadably faithful translation; and I believe a degree of reinterpretation for the new language may be not only inevitable but desirable.” —David Mitchell

The last twenty years have seen an explosion in popularity in the adaptation of speculative fiction. From Electric Dreams to The Lord of the Rings Online to the MCU to God of War – the proliferation of media drawing from and making choices about how to convert the written word to another medium shows no signs of stopping.

Building on its proximity to Hollywood, SoCalMoot issues a call for papers, panels, and presentations interrogating the process and challenges of adapting speculative fiction and mythology to film, television, video games, music, or any other creative medium.

This topic should be understood as broadly as possible and, in addition to traditional academic analysis, SoCalMoot welcomes proposals which include creative presentations, performances, or screenings.

SoCalMoot is soliciting proposals for moderating discussion panels during the event. Submissions will be open until Friday, February 14. Please send all submissions to [email protected] with the subject “SoCalMoot Submission.”

Please note that Submission of a proposal constitutes an agreement to attend the conference if the proposal is accepted.