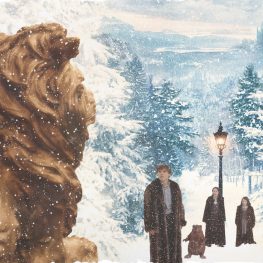 Friendship was an absolutely critical part of C.S. Lewis’ life. His lifelong friendship with his brother created a literary household. Lewis’ childhood and university friendships helped him renegotiate his core values and his life philosophy. The Oxford Inklings, the main space for Lewis’ professional friendships, was a group that worked together to (and sometimes against one another) to produce groundbreaking linguistic history, literary history, literary criticism, Christian apologetics, and fiction–a group out of which came The Hobbit, The Lord of the Rings, and The Chronicles of Narnia. And as Lewis was writing Narnia, his memoir, and his acclaimed work of literary fiction, Till We Have Faces, Lewis developed a friendship with American poet, Joy Davidman. That friendship would grow into romantic love, giving life to new projects and, upon Joy’s death, a transformative memoir of loss, A Grief Observed.

One of the most powerful chapters in C.S. Lewis’s book, The Four Loves, is his treatment of friendship. Because friendship is so important for Lewis, and because Lewis’ writings have been so inspirational to readers, a discussion about Friendship and Narnia could be valuable.

Dr. Dickieson will be joined by C.S. Lewis scholars Diana Pavlac Glyer and Jason Lepojärvi. Dr. Glyer has written books on the power of friendship for artistic production among Lewis and the Inklings, and Dr. Lepojärvi’s PhD dissertation was on Lewis and Love.

This is a supplemental, open class to Signum’s course on C.S. Lewis and Mythologies of Love & Sex. All are invited to join. Familiarity with Narnia is recommended, and Dr. Dickieson will offer a reflection of The Voyage of the Dawn Treader. The class is open, though, to anyone who has an interest in friendship and C.S. Lewis.

Note: Audience members should be aware that if they chose to participate using their microphone, their voices will be recorded