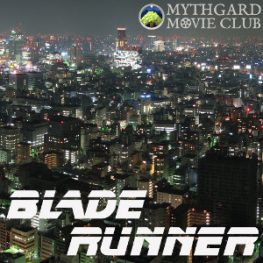 Join the Mythgard Movie Club on January 31, 2019, for a panel discussion on Blade Runner (1982) directed by Ridley Scott and starring Harrison Ford.

Join the Mythgard Movie Club on January 31, 2019, for a panel discussion on Blade Runner (1982), starring Harrison Ford, Rutger Hauer, Sean Young, and Edward James Olmos. Directed by Ridley Scott, the film is based on Philip K. Dick’s 1968 novel Do Androids Dream of Electric Sheep? and follows the story of policeman Richard Deckard as he attempts to hunt down several “replicants” – bioengineered automatons who are nearly indistinguishable from humans – that have gone rogue.

For this discussion we will primarily be using the Final Cut version, both because of its ready availability and because, in the view of the panelists, it is the most compelling. Blade Runner: The Final Cut is available from Amazon and other retailers, and digital versions are available for rent or purchase from a variety of streaming services, including YouTube, Google Play, iTunes and Vudu. Note that in March 2019, the Mythgard Movie Club will also be discussing Blade Runner 2049, the sequel released in 2017, so viewers may wish to consider purchasing this 2-film set.

Curtis Weyant is a Signum Grad School alumnus who rarely remembers his dreams, whether of electric sheep or otherwise, which gets him into trouble more than one would think likely. A digital marketer by trade, Curtis co-hosts the weekly podcast Kat & Curt’s TV Re-View, thanklessly edits Laserflail, and totally does not have a partial manuscript about a dark, dystopian future with homicidal androids anywhere in his Google Drive.