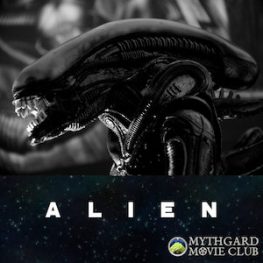 Join us on May 3, 2018, for a Mythgard Movie Club discussion on the 1979 sci-fi horror classic Alien, directed by Ridley Scott and starring Sigourney Weaver.

Join us on May 3, 2018, for a Mythgard Movie Club discussion on the 1979 sci-fi horror classic Alien, directed by Ridley Scott (Blade Runner, The Martian) and starring Sigourney Weaver (Ghostbusters, Avatar) as the iconic Ellen Ripley. Dan O’Bannon (Dark Star, The Long Tomorrow, Total Recall) wrote the original screenplay, though numerous revisions were made by David Giler and Walter Hill during the course of production.

Coming off the recent blockbuster success of Star Wars (1977), 20th Century Fox became interested in expanding its science fiction repertoire. The studio acquired rights to the script from O’Bannon (who had worked on computer animation and special effects for Star Wars) via Brandywine Productions, which was owned by Giler and Hill, and eventually chose Ridley Scott to direct the film based on the quality of his debut feature film, The Duellists (1977). The story as O’Bannon intended it was to be a horror version of his sci-fi comedy–turned cult classic Dark Star; to accomplish that, he referenced numerous cinematic and literary sources, including The Thing from Another World (1952 – itself based on “Who Goes There?” by John Campbell),  Forbidden Planet (1956), Planet of the Vampires (1965), Clifford D. Simak’s “Junkyard” (1953) and the tales of H. P. Lovecraft. Others have noted additional resemblances, including to the 1975 episode of Doctor Who, “The Ark in Space,” Jaws (1975), and even Agatha Christie’s And Then There Were None (1939).

Initial reviews of the film were mixed, with critics like Roger Ebert calling it a disappointment as “basically just an intergalactic haunted house thriller set inside a spaceship.” Nonetheless, it won an Academy Award for visual effects, BAFTAs for Best Production Design and Best Sound, and top picture nods from both the Hugos and the Saturn Awards, among other accolades. Today, Alien frequently makes it on best science fiction film lists (and even in some best films lists), and it is often cited as a reference for later films.

Note: Director Ridley Scott has stated that he prefers the original 1979 version of the movie, as opposed to the “director’s cut” later included on DVD editions of the film. While we might discuss both versions during the Mythgard Movie Club panel, we will focus primarily on the original theatrical version.

Curtis Weyant is a Signum Grad School alumnus who saw Alien: Resurrection before any of the other films in the franchise, and he does not recommend that others view the series in that order. It’s almost certain that he will bring up his paper on cabin scenarios during this discussion of Alien, since it’s totally a cabin scenario. A digital marketer by trade, he co-hosts the weekly podcast Kat & Curt’s TV Re-View and occasionally pecks away at his own creative work.

Dominic Nardi is a political scientist who focuses on judicial politics in Southeast Asia. He worked as a consultant for USAID-funded projects. He received his Ph.D. from the University of Michigan and J.D. from Georgetown University. In addition, he has published articles about politics in Star Wars and The Lord of the Rings, and is currently working on an article about prescience in Dune. You can find more of his writing at NardiViews or @NardiViews on Twitter.