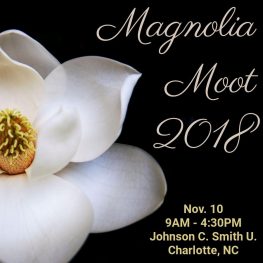 Johnson C. Smith University, Signum University, and the Mythgard Institute are pleased to announce the inaugural MagnoliaMoot 2018, a symposium on the theme “Lost and Found (Again): Finding One’s Way There and Back Again.” A mixture of paper presentations, panels, and discussions will be offered along with a keynote address by guest of honor Dr. Corey Olsen, “The Tolkien Professor.”

An over view of the schedule is provided below. See the full schedule here.

Lost and Found (Again): Finding One’s Way There and Back Again

“But without a feast we shan’t remain alive much longer anyway,” said Bombur, and Bilbo heartily agreed with him. They argued about it backwards and forwards for a long while, until they agreed at length to send out a couple of spies, to creep near the lights and find out more about them. But then they could not agree on who was to be sent: no one seemed anxious to run the chance of being lost and never finding his friends again. In the end, in spite of warnings, hunger decided them, because Bombur kept on describing all the good things that were being eaten, according to his dream, in the woodland feast; so they all left the path and plunged into the forest together.” (The Hobbit)

Tolkien’s work has an interest in finding one’s place, both figuratively and metaphorically, in the wider world. It is not enough to have a place, one must understand it and one’s relationship to it to come to a clear understanding of what it means to belong in and to a place. This concept is not exclusive to Tolkien, but is also present in many works of science fiction and fantasy literature, films, and television. MagnoliaMoot will take up this theme, as well as other topics relating to the works of fantastic literature, television, and film. Please submit all abstracts by November 2, 2018 to [email protected]. Acceptance will be notified by November 4, 2018.

Johnson C. Smith University (JCSU) is a private liberal arts university with proud HBCU traditions and a future aimed at diversity. Approximately 1,600 highly talented and motivated students from various backgrounds are enrolled at JCSU and its faculty and staff members are equally as unique, coming from all over the world.

JCSU has a limited number of suite-style rooms available in its Mosaic Village facility for those attending MagnoliaMoot. The closest hotel to the campus is the DoubleTree Hotel (part of the Hilton Hotel Group). Charlotte is a major business and banking center with a number of hotels and restaurants relatively close to JCSU’s campus.