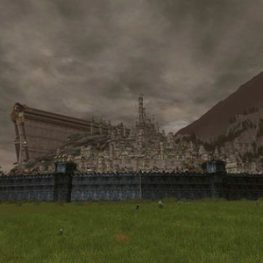 Join Signum University Founder and President Dr. Corey Olsen on Saturday, September 29, 2018, as he once again transforms into Wigend and fights his way through hordes of orcs, wargs, trolls, and ambling undead to reach the gates of the last and strongest defense against the Dark Lord: Minas Tirith. Come watch the fun as Dr. Olsen discusses adaptation, answers lore questions, and hands out raffle prizes to attendees!

The LOTRO marathon has become a staple part of Signum’s Annual Fund Campaign. This year, the campaign theme is “On the Doorstep: Unlocking new worlds of learning,” and the virtual world of Middle-earth built by Standing Stone Games is one of those new frontiers that Signum and its speculative fiction research branch, the Mythgard Institute, has been exploring. Through programs like Exploring The Lord of the Rings and weekly adventures with Gryfflet the Burglarious Hobbit, Dr. Olsen examines the unique and creative ways that Tolkien’s work has been adapted into an interactive and engaging world.

Donations to Signum University to support our LOTRO programming and other educational events and activities are appreciated before, during, and after this marathon.