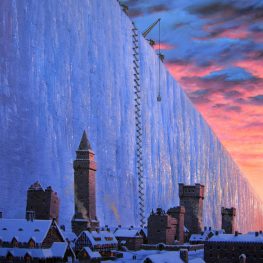 In July 2017, Signum University will be assembling a Small Council of experts on A Song of Ice and Fire by George R. R. Martin and the HBO television adaptation, Game of Thrones.

This summer, winter is coming to Signum University as several faculty and noted guest scholars will be assembling their own Small Council to discuss George R. R. Martin’s A Song of Ice and Fire and the HBO adaptation Game of Thrones. Several of our guests have published on important aspects of the Game of Thrones phenomenon, including brokenness, monsters, medievalism, history and historical fiction, dyscatastrophe and eucatastrophe, adaptation, the modern fantasy novel, cultural context, and Martin’s creative skill. We will discuss these topics as well as the more controversial accusations the novels and the show have faced regarding violence, pornography, and misogyny.

We hope you can join us for this event! For those who cannot attend live, the discussion will be recorded and posted on  our Signum Symposia channels on YouTube and iTunes U. You can add the Signum Symposia podcast feed to your favorite podcasting app to download audio-only versions of Signum Symposia.

Want to study A Game of Thrones and other modern fantasy works?
Check out our Modern Fantasy class with an Anytime Audit!

About the Small Council

Dr. Karl Persson is a scholar of premodern literature who has taught with Signum for two years now, and whose academic interests include theology, proverb culture, Biblical reception, and medievalisms (reception of the Middle Ages in pop culture etc.).

Dr. Susan Johnston is an associate professor of English at the University of Regina in Saskatchewan, Canada, where she teaches and supervises undergraduate and graduate work in fantasy literature, including George R.R. Martin’s A Song of Ice and Fire, Victorian literature, and literary historiography. She has published and presented on adaptation, popular culture, and fantasy literature, including articles on fantasy and theology such as “Harry Potter, Eucatastrophe, and Christian Hope” in Logos: A Journal of Catholic Thought and Culture in 2011 and a related article on dyscatastrophe called “Grief poignant as joy: Dyscatastrophe and Eucatastrophe in A Song of Ice and Fire” in Mythlore in 2012. In 2015 she co-edited Mastering the Game of Thrones: Essays on A Song of Ice and Fire (McFarland) with her colleague Jes Battis, and she is presently working on a book on A Song of Ice and Fire tentatively titled “Bastards and Broken Things.” In it, she argues that the interplay of history and fantasy, comedy and tragedy, dyscatastrophe and eucatastrophe in Martin’s work point to an overarching concern with betweenness and brokenness, and reads Martin’s epic through its representation of imperfection and brokenness, so as to trace Martin’s idea of the human and the “monster,” both of history and of fantasy.

Dr. Joseph Young is from the University of Otago in Dunedin, New Zealand, where he wrote a doctoral thesis on pre-Tolkienian secondary-world fantasy, He has since published on the works of E.R. Eddison, Mervyn Peake, H.P. Lovecraft and Jacek Yerka as well as George R.R. Martin. He is currently a combined teaching and research fellow at the University of Tubingen, where he is teaching the intellectual history of the Gothic tradition while writing a monograph examining Martin’s work in the context of the shapes and functions of the modern fantasy novel. He views Westeros less as an innovative fantasy world than an example of what can be achieved by a skilled, conscientious practitioner of an established creative discipline.

Prof. Brian A. Pavlac is Professor of History and and until recently the Chair of the History Department and a Herve A. LeBlanc Distinguished Service Professor in honor of his work for academia, the college, and the community at King’s College, Wilkes-Barre PA. His special research interests are Medieval Germany, prince-bishops of the Holy Roman Empire (including Nicholas of Cusa), and the Witch Hunts. On these subjects he has authored three academic books and a number of articles, book chapters, book reviews, and encyclopedia entries. He has lived and studied abroad as a student with his alma mater Bowling Green State University in Salzburg, on a Fulbright Grant in Bonn, and as a director with his alma mater Notre Dame in Innsbruck. The Rev. Brian Pavlac also serves the Diocese of Bethlehem as Priest-in-Charge at St. Stephen’s Episcopal Pro-Cathedral in Wilkes-Barre. His most recent book is the edited collection “Game of Thrones versus History: Written in Blood.”

Image: Castle Black and the Wall by Ted Nasmith. Used with permission.

Join us at 2pm EDT on Thursday, July 25 for our Game of Thrones discussion.