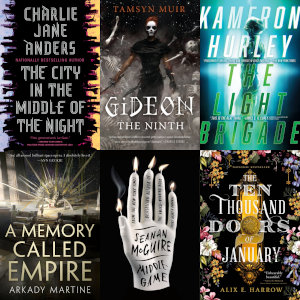 Join us for a roundtable discussion on the Best Novel nominees for the 2020 Hugo Awards.

Want to follow what’s new and exciting in the world of science-fiction and fantasy? Need help deciding what to read next? Planning to move to a different planet and would like to read stories set on other planets to help you prepare?

Then join us at 7pm Eastern on July 31st for our non-affiliated Hugo Awards evening, when a panel of Science-fiction and Fantasy readers will each talk about one of the shortlisted titles in the Best Novel category of the 2020 Hugo Awards!

Each reviewer will take five minutes to introduce their novel and talk about what they liked or didn’t like about it. We will then open up for a wider discussion, taking questions and comments from the audience.

The audience will then vote on which novel they most want to read, and which they think should win the prestigious Best Novel Hugo Award. The actual winner will be announced at CoNZealand, shortly after our event!

About the Hugo Award

The Hugo Award is an annual literary award for the best science fiction or fantasy works and achievements of the previous year, given at the World Science Fiction Convention and chosen by its members. It was first delivered in 1953.