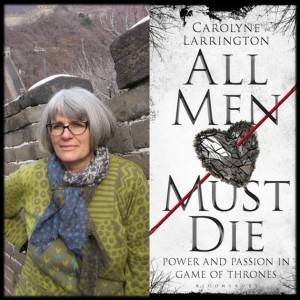 Join us on Friday March 19th, 1pm Eastern, for a chat and live Q&A with Professor Carolyne Larrington.

Join us on Friday March 19th, 1pm Eastern, for a chat and live Q&A with author and scholar Carolyne Larrington. We will discuss Professor Larrington’s latest book, All Men Must Die: Power and Passion in Game of Thrones. Audience members can send questions during the event or in advance by emailing [email protected]. The discussion will be moderated by Gabriel Schenk and Ashley Thomas.

‘All men must die’: or ‘Valar Morghulis’, as the traditional Essos greeting is rendered in High Valyrian. And die they do – in prodigious numbers; in imaginatively varied and gruesome ways; and often in terror within the viciously unpredictable world that is HBO’s sensational evocation of Game of Thrones. Epic in scope and in imaginative breadth, the stories that are brought to life tell of the dramatic rise and fall of nations, the brutal sweeping away of old orders and the advent of new autarchs in the eternal quest for dominion.

Yet, as this book reveals, many potent and intimate narratives of love and passion can be found within these grand landscapes of heroism, honour and death. They focus on strong relationships between women and family, as well as among the anti-heroes, the ‘cripples, bastards and broken things’. In this vital follow-up to Winter Is Coming (2015), acclaimed medievalist Carolyne Larrington explores themes of power, blood-kin, lust and sex in order to draw entirely fresh meanings out of the show of the century.

Carolyne Larrington is Professor of Medieval Literature at the University of Oxford. She is the author of The Women’s Companion to Mythology (1997), King Arthur’s Enchantresses (2006), The Land of the Green Man: A Journey through the Supernatural Landscapes of the British Isles(2015) and Winter is Coming: The Medieval World of Game of Thrones (2015), A Handbook to Eddic Poetry (2016), and The Norse Myths: A Guide to Viking and Scandinavian Gods (2017), amongst others. The second edition of her translation of The Poetic Edda was published in 2014.