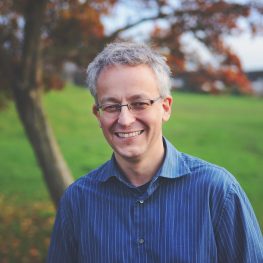 Internationally recognized for his groundbreaking work on the creative development of J.R.R. Tolkien in the context of his times, John Garth is the author of the Mythopoeic Award-winning Tolkien and the Great War (2003) and the 2015-16 Fellow in Humanistic Studies at Black Mountain Institute, University of Nevada, Las Vegas. He lectures on Tolkien for Signum University.

Writer, editor and researcher John Garth is well known for his ongoing work on J.R.R. Tolkien’s life and creativity, and was awarded the Tolkien Society’s Outstanding Contribution Award in 2017.

His first book, Tolkien and the Great War (2003), won the Mythopoeic Scholarship Award, for which his second, Tolkien at Exeter College, was a nominee. His latest publication is  The Worlds of JRR Tolkien: The Places that Inspired Middle-earth (Princeton University Press; Frances Lincoln). A further book, examining Tolkien’s creative life as a response to the crises of his times, was begun while a Fellow of the Black Mountain Institute, Nevada, and is still in progress.

Other publications include chapters in the  Blackwell Companion to J.R.R. Tolkien; in Catherine McIlwaine’s Bodleian Library exhibition book Tolkien: Maker of Middle-earth; and in a forthcoming volume in memory of Christopher Tolkien.

Garth has spoken on Tolkien to specialist and general audiences in the US and across Europe, as well as television and other news media. He has taught courses on Tolkien, and sometimes C.S. Lewis too, for Oxford University, the University of Nevada in Las Vegas, and Signum University.

After reading English at St Anne’s College, Oxford, Garth worked for many years for the London Evening Standard. Besides his work on Tolkien, he writes and edits more generally, both in print and online. His website is http://www.johngarth.co.uk.