The Return of King Arthur 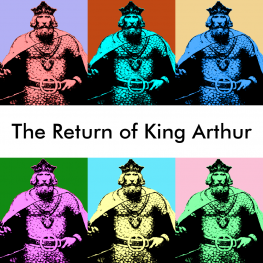 After King Arthur is seemingly killed by Mordred at the end of Le Morte Darthur, the fifteenth-century author Sir Thomas Malory reports, “somme men say in many partyes of Englond that kyng Arthur is not deed” and may “come ageyn” in the future. The literal return of King Arthur has not yet taken place, but the literary return did happen: in 1816, Malory’s retelling of the Arthurian legend was republished in two new editions after a 182-year hiatus.

Since then, the figure of Arthur has grown in imaginative scope and popular appeal. Tennyson’s Idylls of the King reinvented Arthur for the nineteenth century and its commercial and critical success encouraged even more authors to retell the Arthurian legend themselves. By the end of the nineteenth century, the figure of Arthur had become a cultural icon as well as a literary character, lending his name to mass-produced chocolates, coat buttons, ceramic tiles, and bags of flour.

This course tracks the return of King Arthur through British and American novels, poetry, plays, films, TV, and comics. We look at the ways that writers have reproduced and remade Arthur: from paragon of chivalry to cruel despot; powerful warrior to compassionate peacemaker. Ultimately, we will find answers to the question Tennyson posed in 1842, in an introduction to his Arthurian retelling: “‘why should any man / Remodel models?'”

PART I: “He is All Fault Who Hath No Fault At All”: Idolizing Arthur, Criticizing Arthur


PART III: “Not as Before”: The Re-turn of King Arthur

Students may use any edition of the following required texts:

Some texts are available copyright-free online or will be supplied by the instructor in the form of short extracts. The following print editions are recommended for students who wish to avoid reading long texts on a screen: