The Meaning of Star Wars 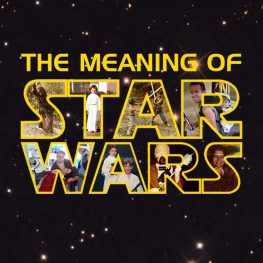 This May the Fourth, join Dr. Amy H. Sturgis as she explores Star Wars from its inception through its many reinventions and innovations to find its true meaning(s).

As the Star Wars franchise thrives in its fifth decade, speaking to audiences across the globe and generations, we should consider the causes of its impressive longevity and ongoing relevance. What makes Star Wars the phenomenon that it is? How has multimedia Star Wars storytelling – through movies, television series, novels, comics, games, audio dramas, toys, and theme park attractions –consistently reflected its influences and reinforced its themes?

Dr. Amy H. Sturgis invites you to join her in exploring Star Wars from its inception through its many reinventions and innovations to find its true meaning(s). In so doing, this class will trace the development of Star Wars and investigate its big ideas, such as the cycles of history, the corruption of power, the effects of colonialism and imperialism, the nature of balance, and the promise of redemption, as well as the difference between selfless love and selfish attachment and the tension between free will and destiny. We will also consider the relationship between the inspired auteur, the collaborative artistic community, and participatory fandom and transformative works, as well as analyze the reasons why Star Wars is considered to be an example of modern mythmaking. Join us as we discuss Star Wars as a commentary on and conversation about history, human nature, spirituality, heroism, and the lasting impact of stories.

Week 1: “You’ve taken your first step into a larger world.” OR Why talk about Star Wars and its meaning(s)?

Week 3: “Tell your sister you were right.”

Week 5: “So this is how liberty dies: with thunderous applause.”

Week 6: “The greatest teacher, failure is.”

Week 7: “A choice to be better” featuring a live discussion/Q&A with Rebecca Roanhorse

Further required and suggested readings/viewings will be provided by the course instructors in the final syllabus.

Notes: Students are invited to watch whichever editions of the films they prefer. The class will discuss the differences between the versions but there is no required edition. Additional required and recommended short texts for reading/viewing/listening will be noted in the weekly schedule.