The Life and Times of the English Epic 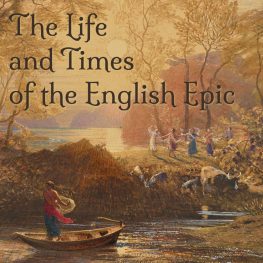 In this course, students will study the evolution of the English Epic over time.

This course explores historical contexts of, earliest inceptions of, and modern revisions to the English Epic genre. Divided along a loosely chronological structure, the course will touch upon core Classical and European texts before shifting to the national epic texts of the English Renaissance and surveying the afterlife of the English Epic. Spenser and Milton specifically constructed epic poems in imitation of Homer, Vergil, Ovid, and Dante, but, during the Renaissance, English national identity and English religious beliefs were deeply intertwined, and these early English Epics—like much of the literature of their time—reflect this congruency. After the Romantic era, the English Epic was adapted and occasionally contorted into a dizzying array of genres and forms, in texts that sometimes challenged the existing status quo of English nationalism and often incorporated epic elements into popular literature.

The first third of the course will highlight some foundational epic texts that established the traditional structure of the epic poem as a genre. While not itself an English Epic, Vergil’s Aeneid was first translated into English in 1490, becoming an essential and widely influential text in England during the late Middle Ages and the entire Renaissance. Medieval and early Renaissance epics from continental Europe, including the French chansons de geste and Dante’s Divine Comedy, intensified English desire for a national epic, as evinced in Spenser’s Faerie Queene and Milton’s Paradise Lost, both of which we will study in the second third of the course. Finally, the last third will explore the afterlife of the English Epic in a broader array of genres: Romantic poetry, spy thrillers, fantasy novels, and British cinema. The course will also touch briefly upon works that subvert and manipulate conventions of the traditional epic, such as the novels of Thomas Hardy and recent films by Edgar Wright and Simon Pegg.

Unit 1: Foundations of the English Epic

Week 2 – Virgil and the National Epic

Week 3 – The Epic in Europe

Week 4 – Dante and the Christian Epic

Unit 2: The Birth of the English Epic

Week 5 – Theology and Monarchy I

Week 9 – The Epic, the Romantics, and the Industrial Revolution

Week 11 – The Epic and the Inklings

Note: Students are not required to acquire the precise editions listed below, but are requested, when reading works in translation, to seek out the listed translators. Access to more of Milton than merely Paradise Lost will be essential. Further required and suggested readings will be provided by the course instructors in the final syllabus.