The Inklings and Science Fiction 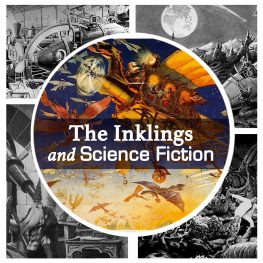 This course covers the Inklings' creative and personal encounters with science fiction.

Of the various men in the writer’s group the Inklings who met in Oxford primarily during the 1930s and 1940s, two achieved world renown with their writings: C.S. Lewis and J.R.R. Tolkien. Each had a strong interest in the developing field of science fiction (the term itself was coined in 1926). Lewis hand published more of what could be called science fiction than any other member—including Out of the Silent Planet (1938), Perelandra (1943), and That Hideous Strength (1946); Tolkien left some aborted efforts that only appeared posthumously. Other members (like Owen Barfield and Charles Williams) tried their hand at some kind of science fictional narratives, or were (like Lewis’s brother Warnie) lifelong devotees of the genre. In the 1950s and 1960s, both Lewis and Tolkien were meeting up or corresponding with other now well-known writers of science fiction like Arthur C. Clarke, John Christopher, Brian Aldiss, and others. This course covers the Inklings’ creative and personal encounters with science fiction.

Week 1 – Who were the Inklings, and the slippery definition of science fiction

Week 12 – Inklings and Their Influence

The links below go to the Amazon page where you can purchase each specific text. Purchasing the books through these links helps Signum University at no additional cost to you. Selections from other readings and articles will be provided in class.