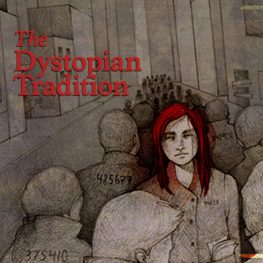 This class will consider historical and current “what if?” thought experiments, including classics such as 1984 and bestsellers like The Hunger Games.

What is the dystopian tradition? Why is it still so relevant today?

Over the years, thinkers have used dystopias — stories of worlds gone wrong, of worst-case scenarios – to warn their contemporaries about what they viewed as dangerous trends in society and challenge their readers to make the world better. This class will consider a variety of historical and current “what if?” thought experiments, including classics such as 1984 and current bestsellers such as The Hunger Games. Students will explore the specific conditions that inspired these dystopias, the general warnings inherent in them, and the broad trends in dystopias over time.

Week 3 – Totalitarianism and the Surveillance State

The Space Merchants by Frederik Pohl and C.M. Kornbluth (1953)

Week 5 – The Bomb and the War-Minded World

Week 7 – Environmental Collapse and the Post-Human

Where Late the Sweet Birds Sang by Kate Wilhelm (1977)

The Parable of the Sower by Octavia Butler (1993)

Week 11 – The Internet and the “Process of Dumbening”