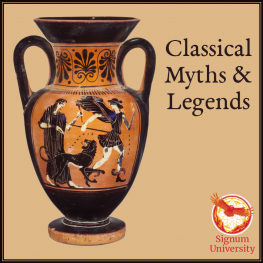 This course puts the myths and legends of the Classical world in their wider cultural and historical contexts.

This course places the principle Classical myths and legends in their cultural and historical context, with some attention to discussion of subsequent influence. The course focuses on the rich array of theme, genre, imagery, and message of Classical myths and their reception in the classical world. The readings are drawn from the elements of the key myths that inform nearly a millennium of literature, philosophy, and art. The lectures and the topics in this course by nature are grander in scope than is possible to cover fully in a single course. In this course, we will contextualize the myths, point to how they were understood in Classical antiquity, and how they were depicted in Classical art. Most importantly, where possible, connections will be made to later, Germanic myths and legends to illustrate both continuity and influence.

The Iliad, The Odyssey, and The Aeneid translated by Robert Fagles (this specific box-set not required).

Further required and suggested readings will be provided by the course instructors in the final syllabus.