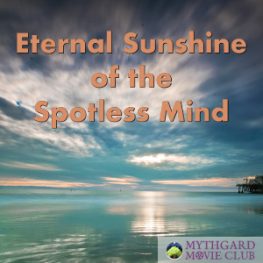 Join us on December 4, 2017, at 8:30 pm for the inaugural session of the Mythgard Movie Club, as we explore memory, loss and attraction in the science fiction film Eternal Sunshine of the Spotless Mind.

On December 4, 2017, at 8:30 pm Eastern Time, the Mythgard Institute will proudly present the first installment of its new series of panel discussions on film and television shows, the Mythgard Movie Club.

Facilitated by Signum Grad School alumni and podcasting partners Katherine Sas and Curtis Weyant, the inaugural discussion of the Mythgard Movie Club will look at Eternal Sunshine of the Spotless Mind, which was directed by Michel Gondry and stars Jim Carrey and Kate Winslet. Among other things, this science fiction film explores themes of memory, trust, and the persistence of attraction and love.

The panel for this session is made up of participants from the One Fantastic Rogue Beast discussion earlier this year, which was presented as part of the Signum Symposia. The panelists include Katherine Sas, Curtis Weyant, Brenton Dickieson, Emily Strand & Kelly Orazi.

We welcome participation from all who are interested in discussing this movie. We will be using our standard GoToWebinar “Netmoot” interface.

Kat Sas recently submitted her final M.A. Thesis for Signum University where she is completing her degree concentrating in Imaginative Literature. Eternal Sunshine of the Spotless Mind is one of her favorite films ever, and she browbeat fellow-facilitator Curtis into submission in order to have it as the Movie Club’s first subject of discussion.

Curtis Weyant is a Signum Grad School alumnus who sometimes wishes he could erase the memory of his thesis experience, much like the characters of Eternal Sunshine erase the most traumatic events from their minds. Along with Kat Sas, he co-hosts the weekly podcast Kat & Curt’s TV Re-View, in which they discuss episodes of various speculative television shows including Buffy the Vampire Slayer, Angel, Doctor Who and Battlestar Galactica.

Brenton Dickieson is working on a PhD on the theology of C.S. Lewis’ fictional worlds and writes the blog, www.aPilgrimInNarnia.com. He lives in the almost fictional land of Prince Edward Island, where he teaches and consults in higher education.

The idea for Mythgard Movie Club was introduced during the Fall 2017 Fundraising Campaign. Watch the video below, in which Kat and Curt discuss the idea with Signum Founder and President Dr. Corey Olsen.