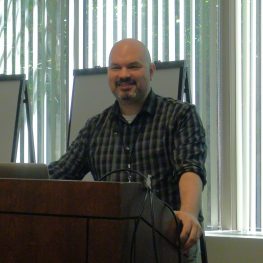 Curtis A. Weyant is a digital marketing specialist by day and helps with Signum's outreach efforts.

Being a digital content specialist by trade and a student of speculative literature by choice, Curtis A. Weyant received his MA in Language & Literature from Signum University in 2017. As the Dean of Outreach, he oversees the various efforts to promote Signum and its programs across our various channels. He also oversees the Signum Website content and design, manages the University’s social media accounts, and is co-host with Katherine Sas of the Mythgard Movie Club.

Curtis is a member of the Whedon Studies Association, and his paper “Exploring Cabins in Whedonverse Woods” has appeared in the association’s peer-reviewed journal Slayage. His essay “‘I’ve Never Met Anyone I Didn’t Disappoint’: In Your Eyes’ Flaws and Fortes” is included in the revised and updated edition of Joss Whedon: The Complete Companion (April 2015). Curtis co-hosts the weekly podcast Kat & Curt’s TV Re-View on Buffy the Vampire Slayer, Angel and Doctor Who, and he makes mostly harmless literary musings at CurtisWeyant.com. His writings have been featured at PopMatters, McSweeney’s Internet Tendency and The Binnacle. He was editor of the Roberts Wesleyan College Journal for the Arts his senior year as an undergrad.