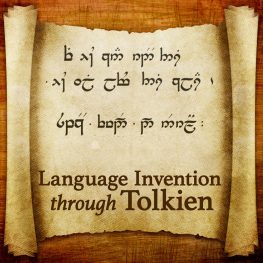 This course will explore language invention through the works of the greatest and most prolific inventors of language for fictional works and world building – J.R.R. Tolkien.

Mythology is language and language is Mythology
The Mind, The Tongue and The Tale are Coeval (On Fairy-stories, p. 181)

I shall express the accusative by a prefix. (The Monsters and the Critics, p. 212)

“Be careful, friends!” cried Gildor laughing “Speak no secrets! Here is a scholar in the Ancient Tongue. Bilbo was a good master, Hail, Elf-Friend!” He said, bowing to Frodo. (The Fellowship of the Ring, p. 88)

This course will explore language invention through the works of the greatest and most prolific inventors of language for fictional works and world building – J.R.R. Tolkien. In his lifelong work on his legendarium, Tolkien, at both heart and mind a philologist, put language invention at the core of his mythology. Tolkien narrative and para-textual work is infused with his invented names for people, places and items, as well as the use of these invented languages in dialogue, prose and poetry. The interdependence of invented languages and mythological narrative permeates the entire Legendarium Tolkien would work on for over sixty years and is a crucial and consistent element of his world-building.

This course will be taught in three key parts.

In part one, we will set a context for Tolkien’s language invention by exploring the tradition of invented languages which Tolkien was working from, building upon and responding to in his own creative work. This will include the reading and discussion of primary texts and secondary analysis of some of the major invented languages before Tolkien and an exploration of their linguistic, narrative and cultural contexts and, in several cases, what elements of them Tolkien responded to in his language invention.

In the second part of the course, we will study in-depth analysis of Tolkien’s own “nexus” of Elvish and other invented languages by exploring the theory behind Tolkien’s language invention and analyzing the corpus of languages Tolkien created – from pre-Legendarium languages like Nevbosh and Naffarin through the languages Tolkien created coeval and codependent with his Legendarium. Then, we will explore the audience/reader reception of Tolkien’s languages and examine they have been used online and in various media, including the recent Peter Jackson films. We will also discuss and debate the question of whether Tolkien’s languages can be used for practical writing and conversation (as many have tried to do).

In the third part of the course, we will explore the legacy of Tolkien’s language invention by examining several invented languages contemporary with Tolkien and the invented languages that play an integral role in today’s multi-textual narratives of franchises like Star Trek, Star Wars and the HBO series Game of Thrones.

The course will anticipate the publishing in Spring 2016 of a new edition of Tolkien’s foundational talk on language invention, “A Secret Vice,” co-edited by Dimitra Fimi and Andrew Higgins, which Tolkien delivered in the early 1930s. The co-editors will offer several follow-up lectures on the currently unpublished material that will appear in this volume.

Language Invention Through Tolkien will meet on Wednesdays and Fridays from 4 pm – 5:30 pm Eastern Time.

The Spectrum of Language Invention

Art-Langs for Fiction Before Tolkien

The Other Invented Languages in Tolkien’s Legendarium

Sources, inspirations, different types, and how they change

Note: Daylight Savings Time for 2016 begins on March 13 in the U.S. This may cause a shift in time of the class for students in other countries after this date.

The Legacy of Tolkien’s Language Invention

The Language of Tolkien’s Secret Vice – 20th and 21st Century

A Secret Vice, edited by Andrew Higgins and Dimitra Fimi, will be released April 7, 2016, in the U.S. A follow-up session featuring discussion with Higgins and Fimi will be scheduled for after the book comes out.